A costumed portrayal by Lesley Smith of Anne Boleyn in the Tower of London in the final minutes of her life.

Lesley is the curator of Tutbury Castle in Staffordshire, as well as a medical historian. She has appeared in more than 120 TV programmes and is known for her entertaining and informative performances of historical characters.

St Mary’s will also be an appropriate venue for the show as it stands next to Thornbury Castle, where Anne Boleyn stayed with Henry VIII in 1535 after becoming his second wife.

Full details regarding events, venues and times are available on the festival website below together with information on ticket sales.

Thornbury Arts Festival will be back this summer after an enforced two-year break, with a mini-event aimed at paving the way for a full return next spring.

The annual programme of music, comedy, drama and talks was cancelled in both 2020 and last year due to the coronavirus pandemic, with closure of the town’s Armstrong Hall - the festival’s traditional venue - adding to difficulties facing organisers.

But they were determined to plan something for the town and surrounding area for 2022 and have devised a three-day festival of live performances to run from Thursday, June 23, to Saturday, June 25.

Three venues will be used this year, with St Mary’s Church, Thornbury, hosting the opening night - a costumed portrayal by Lesley Smith of Anne Boleyn in the Tower of London in the final minutes of her life.

Lesley is the curator of Tutbury Castle in Staffordshire, as well as a medical historian. She has appeared in more than 120 TV programmes and is known for her entertaining and informative performances of historical characters.

St Mary’s will also be an appropriate venue for the show as it stands next to Thornbury Castle, where Anne Boleyn stayed with Henry VIII in 1535 after becoming his second wife.

Making a popular return to the festival on the Friday will be Stringfever - four musicians who combine their musical skill on electric instruments with beatbox, humour and showmanship.

The players are all from the same family and mix classical favourites with rock classics and movie themes. They were a hit with their audience when they last appeared at the festival in 2017 and this year the quartet will perform their show in the Castle School.

Bringing the festival to a close will be the Cate Cody Quintet, who had been set to perform at the 2020 event before lockdown forced its cancellation.

Cate is one of the UK’s finest jazz singers, with appearances at the BAFTA Television Awards, for Earl Spencer at Althorp and at the Emirates Stadium, as well as performing at sell-out concerts at jazz festivals and dance events.

Her musicians are professionals from the top ranks of British jazz, having worked with the likes of Acker Bilk, George Melly, Georgie Fame, Kenny Ball, Imelda May and Clare Teal.

Cate specialises in the Great American Songbook from the 1920s to 1940s and will perform a selection of favourites when she appears at Tytherington Village Hall.

Thornbury Arts Festival normally runs across nine days each spring and the team behind the event hope to get back to normal next year.

The festival committee said: “We’re really pleased to have been able to put together this programme, albeit a shortened form of the festival, and look forward to welcoming audiences once again.”

Meanwhile, the festival’s popular guided walk has been moved to Sunday, September 18, with two groups to be taken around “hidden Chepstow”, ending with a visit to the Severn Princess ferry, which used to cross the river before the Severn Bridge opened in 1966.

Full details regarding events, venues and times are available on the festival website www.thornburyartsfestival.org.uk together with information on ticket sales.

Thornbury Arts Festival runs for ten days every Spring - see the calendar at the bottom of this page for full details of events when available.

The Arts Festival came into being in 1969 with varied programmes of events covering music, drama, film and comedy, as well as visual arts.

Signatures in the archive album range from an astronaut, an explorer, radio and television personalities and actors, writers and scientists as well as Big Bands, singers and musicians.

The programme also includes lunchtime talks and entertainment, children’s events including an Eisteddfod for music and drama, a village walk and The Severn Vale Art Trail.

As one of the longest running arts festivals in the country, the Thornbury event is run entirely by volunteers and boasts a mix of daytime and evening events to appeal to as wide an audience as possible.

In 1989, Thornbury Arts Festival introduced a pre-Festival Eisteddfod with 30 classes for local instrumentalists and vocalists aged 18 and under.

It was held over two days at the Castle School and Manorbrook Junior School, sponsored by the Lions and attracted several hundred young people.

Over 25 years on, Daphne Ashton, who helped to set up the Eisteddfod, is still an active member of the team and the event is still generously sponsored by the Lions.

Since 1989, thousands of young people have participated in this wonderful event and many have gone on to make music a central part of their lives, sometimes professionally. 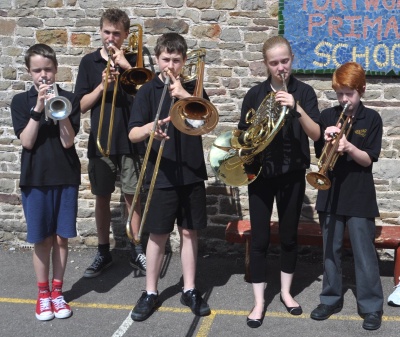 Watching the development of vocalists and instrumentalists year on year has been one of the delights experienced by those who have been involved in the Eisteddfod in the past 25 years.

Over the years there have been changes – now most of the classes are held in the peaceful setting of The Whitsun Hall, thanks to the hospitality of The Hatch Community and in St Mary's Church, but over the years many local schools, halls and churches have been host to the Eisteddfod itself and to the Eisteddfod Concert, which has always been the culmination of the hard work put in by participants and the volunteers who run this worthwhile event.

Classes have changed – some taken out, others added and over a hundred adjudicators have come along to encourage and advise young musicians and vocalists.

The age range has been extended and in 2001, Speech and Drama classes were added, enthusiastically attended by budding thespians.

Originally the Eisteddfod was organised by The Festival Committee but the considerable demands of the administration led to the formation of a sub-committee of hardworking volunteers.

For further information about this very worthwhile and enjoyable event for the young people of Thornbury and the surrounding districts, please see the events calendar at the bottom of this page and look at the Festival website – www.thornburyartsfestival.org.uk/eisteddfod.

Any queries can be addressed to Kate Phillipson-Masters by email: .