The Founding of Thornbury Workhouse

At the first lecture of the Thornbury Local History and Archaeology Society’s 2012/13 speaker programme, local historian Tony Cherry returned to deliver a talk on the origins and operation of Thornbury Workhouse.

Provision for the relief of poverty was radically overhauled by the Poor Law Amendment Act 1834, which paved the way for the Thornbury Workhouse. It put in place a national structure, overseen by the Poor Law Commissioners in London, and grouped parishes together in “Unions” to enable more efficient administration by the Commissioners. The Thornbury Union stretched from north Bristol to Berkeley and its Board of Guardians consisted of elected representatives of the constituent parishes and local JPs.

The Board of Guardians soon decided the existing workhouses in the parishes were ill-suited to the needs of the Union and looked to purchase a site for the construction of a new Union Workhouse. The Guardians entered into a contract to purchase land from a Richard Gwynn, but subsequently decided that they preferred a site known as Coldstones, located in the area of the modern-day Mundy Fields. Fortunately for them, Mr Gwynn harvested crops growing on the land which the Guardians had contracted to purchase – an act which entitled the Guardians to treat the contract as repudiated. 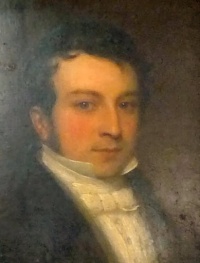 Master strategist Edmund Lloyd, from a portrait owned by the Lloyd family. Image reproduced from www.thornburyroots.co.uk, with permission.

The matter was not, however, closed, as the Board was split over whether or not to build on the Coldstones site after all. A petition opposing the site was sent to the Commissioners in London, signed by a number of local notables (including those who feared that their views over the Severn Vale would be spoilt by the construction of the workhouse – an early nineteenth century example of ‘Not in my back yard!’). The Commissioners indicated that they would approve the purchase of Coldstones if a suitable road to the site could be laid, and so the plan’s supporters on the Board set about seeking to purchase the land needed for the new road from its owner, a Mr Bridgman.

Mr Bridgman turned out to be one of those “difficult characters” and was determined to drive a hard bargain with the Guardians, who had little option but to accede to his demands. When they agreed to his price, he told them to return the following day when he would make a decision as to whether to sell. They did so, only to find that he had already sold the land to Edmund Lloyd, a solicitor and partner of Thomas Crossman. It will perhaps not come as a tremendous surprise to learn that the wily Mr Lloyd was one of those opposed to the Coldstones scheme, and had seemingly bought up the land in order to foil it.

Mr Lloyd had won his battle (moral: don’t pick a fight with a solicitor) and the Guardians were forced to look elsewhere, eventually settling for a site at The Coombe on Gloucester Road, where the Union Workhouse (now Beechacres) still stands.