The Berkeleys and Berkeley Castle 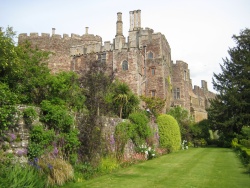 At the final meeting of the Society’s 2009/2010 programme, Anton Bantock enthralled his audience with the remarkable history of the rise and fall of the Berkeley family in mediaeval England. Justice cannot be done to this romp through the Middle Ages in just a few hundred words, so I shall confine myself to a few of the most dramatic (and scandalous!) passages from the family’s history.

The family’s rise to fame began in earnest with Robert Fitzharding. Fitzharding invested a fortune made in trade in a number of manors in and around Bristol. When civil war broke out in the reign of Stephen, Fitzharding sided with Matilda, who entrusted her son to his care. The young Henry resided at Fitzharding’s house on Baldwin Street where he was educated by Master Matthew, a lawyer. Henry’s seminal role in developing the English legal system when he succeeded Stephen as king is probably at least partly attributable to this education. Henry also granted vast tracts of land – including Berkeley, whose name the family adopted – to his one-time host Fitzharding: the family was on the up!

In the reign of Edward I, Thomas Berkeley incurred the wrath of the king when a dispute with the city of Bristol got out of hand. It began when the city outgrew its walls and annexed two parishes to the south of the River Avon which were part of the Berkeleys’ manor of Bedminster. Matters came to a head in 1304 when both the Berkeley family and the city claimed jurisdiction to try a man arrested for murder. The Berkeleys took him to Bedminster to await trial, whereupon a party of Bristolians marched on the manor and ransacked the manor house. In retribution Thomas prepared an ambush for the mayor and aldermen of Bristol when they attended a fair at the village of Dundry. According to the Berkeleys’ seventeenth century chronicler, John Smyth, one “Adam the Cheesemaker” had his legs so badly damaged in the fray that “the marrow ran out of his shin”. The king was none too pleased, but agreed to pardon Thomas in return for his contributing soldiers to the king’s latest campaign! 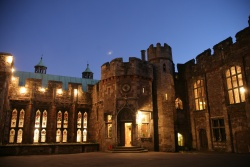 Perhaps the most notorious event to have taken place at Berkeley Castle occurred during the time of Thomas’s grandson, also called Thomas. By that time the family were supporters of Roger Mortimer, one of the most powerful nobles in England and Thomas’s father-in-law. Mortimer was the lover of Edward II’s queen, Isabella, and in 1326 the pair seized control of the kingdom. Edward was captured and imprisoned at Berkeley Castle, and placed under the guardianship of Thomas. It was considered too dangerous to keep the king alive: he might become a rallying point for resistance were he to escape. To avoid leaving visible signs of violence upon the king, Thomas was instructed to suffocate him by placing the rotting carcases of animals below his room. When this failed, more desperate measures were called for, and the widely accepted version of events is that the king was thrown over a chest and a red-hot poker thrust up his behind.

The family’s fall from grace began with a dispute over the will of another Thomas Berkeley, which mysteriously failed to mention who was to inherit the vast Berkeley lands. Thus began a feud between two branches of the family which was to prove its downfall. The feud culminated in the Battle of Nibley Green in 1469 – the last battle fought on English soil between private armies. The battle was intended to be between the personal retinues of Viscount Lisle and William Berkeley, but William’s less-than-sporting tactic of hiring a mercenary army gave him a significant advantage in numbers and won him the day. A battle fought in the courts did not conclude until the reign of James I and is the longest-running case in English legal history.

The feud took its toll and much of the wealth and prestige of the family was lost. Nevertheless, the family endure to this day and still reside in the castle they were granted nearly 900 years ago. The Queen once said, “There’s too much, you know, history.” The Berkeleys, on the other hand, seem to have forged their path through the ages on the basis that you can’t have too much of a good thing!