Electrical appliances of a bygone era

At the October meeting of the Thornbury Local History and Archaeology Society, Peter Lamb entertained his audience with an amusing talk on the electrical appliances of yesteryear. 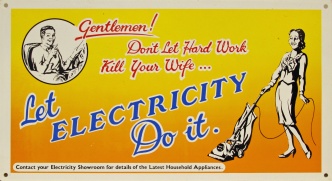 The first electric lights began to be commercially produced in the 1850s but could not be generally used until electrical power supplies became available. Taunton led the way in the West Country with a public supply available in 1886; Bristol caught up in 1893. These first lights were arc lamps – at 250 watts they were far too bright for domestic use (it would be somewhat akin to lighting your living room with an arc welder!), so were used for street lighting. Aside from their unsuitability for domestic use, the arc lights’ principal flaw was that the electric arc was formed between two carbon rods which gradually burned away over a period of eight hours. Each street light would contain two pairs of rods and could switch from one to the other when the first pair burned out; nevertheless, they required constant maintenance by “arc light trimmers”, and in the Temple Back area of Bristol the lights were switched off at midnight to increase the lifespan of the rods.

The filament bulb was invented by Joseph Swan of Newcastle, who patented his invention in Britain about a year before the more celebrated Thomas Edison was granted a U.S. patent for his bulb. Swan and Edison’s lights burned up the oxygen in the bulb, creating a vacuum and thereby ensuring that the filament itself was not consumed. In order to enter the British market, Edison’s backer suggested a collaboration with Swan, and together they formed the Edison and Swan United Electric Light Company and marketed the Royal Ediswan bulb, which became a commercial success in the States (perhaps because of the royal connotation). Advertisements for electric light bulbs proclaimed that users could “do without the annual whitewash”, as the new bulbs did not leave brown strains upon the ceiling, as their gas predecessors had.

Electric irons were first developed in the 1880s and the workings of the device remained essentially unchanged until 1938, when the thermostat was developed, overcoming one of the electric iron’s most significant design flaws: prior to this the only way to regulate the temperature was to unplug the iron!

The first practical domestic electric cooker was produced by the General Electric Company. However, the development of the cooker was also held back until the invention of the thermostat: earlier models had relied upon a thermometer fixed to the outside of the door, the bulb of which sat in front of a small vent. The Rytemp thermostatically-controlled oven was introduced in 1938, although thermostats only began to be mass-produced after the Second World War.

After using electric elements for lighting and heating, one of the most significant developments in electric technology was the electric motor. Hubert Cecil Booth created a motorised vacuum cleaner in 1901, originally oil-powered but later converted to run on electricity. In the face of fierce competition from American entrepreneur William Hoover, he developed the popular Goblin vacuum cleaner, so called because it “gobbled up” dust.

Mr Lamb illustrated his talk with a number of historical advertisements for electricity and electrical appliances, many of them betraying the gender stereotypes of their day: one for electric ovens declared (best BBC tones, now): “She’s happy because her cakes are lighter. He’s happy because his bills are lighter, too!” The prize, however, must go to an advertisement which surely gives an insight into the mind of its designer, as it jauntily proclaims, “Gentlemen! Don’t let hard work kill your wife....let electricity do it.”