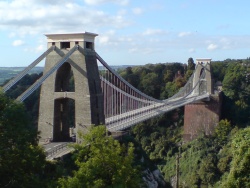 A large audience attended the Society’s March meeting to hear Mike Rowland’s talk on the history and construction of Clifton Suspension Bridge.

The bridge’s history begins in 1754, when William Vick, a Bristol wine merchant, died leaving £1,000 in his will for the construction of a stone bridge without tolls over the Avon gorge. This capital sum was to be invested and, once it had grown to £10,000, a competition was to be held to design the bridge. 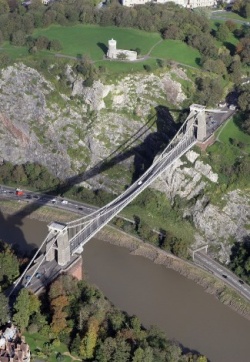 It became apparent that a stone bridge would be far too expensive and also that, with no public money to help fund the project, the bridge would be required to pay for itself. An Act of Parliament was passed altering the terms of Vick’s bequest so that an iron suspension bridge could be built and tolls charged.

In 1829, when the value of the bequest had reached £8,000, a committee was formed to oversee the competition and Thomas Telford, the leading civil engineer of the day, was asked to judge it. Telford rejected all 22 of the designs which were submitted, including four by Brunel, on the erroneous basis that it was impossible for a suspension bridge to span a distance greater than 600 feet. He then submitted his own design for a bridge supported by two towers rising from the bottom of the gorge. Telford, however, was foist on his own petard when the committee dismissed his design on cost grounds. The competition was reopened the following year and again Brunel was unsuccessful. A man who wouldn’t take “no” for an answer, Brunel gathered the judges together and lobbied them for two days until they revoked their original decision and awarded him the commission.

In 1831 a ceremony was held on the Clifton side to mark the commencement of work, but the project was dogged by political and financial difficulties and by 1843, with only the piers completed, the project had been abandoned.

When Brunel died in 1859 the Institution of Civil Engineers resolved that the bridge should be completed as a fitting memorial. The project was placed in the hands of Sir John Hawkshaw and William Henry Barlow, who made some alterations to Brunel’s original design, increasing the width of the deck (had they not done so it is likely that the bridge would have been purely pedestrian today) and doing away with Brunel’s Egyptian-inspired ornamentation, which included sphinxes on top of the piers. 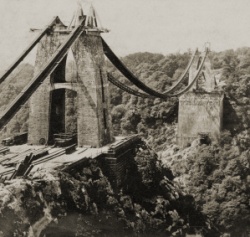 The bridge was constructed by shipping a rope across the gorge which was then used to pull wires across. Once the wires were taut, planks were laid across the gorge on top of them and the chains from which the deck is suspended built link by link on top of the planks. The first rods were then hung from the chains and the deck constructed incrementally from each pier as each pair of rods was hung, finally meeting in the middle. The bridge was formally opened in 1864.

Mr Rowland also shared one of the hidden secrets of the bridge’s construction. The Leigh Woods pier rests upon a large sandstone-clad abutment which had been thought to be solid: there were no plans or records to indicate otherwise, and a borehole made by a local engineer had discovered no cavities. However, in 2002 an ultrasound of the abutment was carried out which revealed a void and led to the discovery of 12 vaulted chambers up to 35 feet high, filled with an impressive array of stalagmites and stalactites.

Today more than four million cars cross the bridge every year: when one considers that it was designed to carry light horse-drawn traffic and pedestrians, this is a remarkable testament to the genius of Brunel.