Bristol, Thornbury and the Civil War 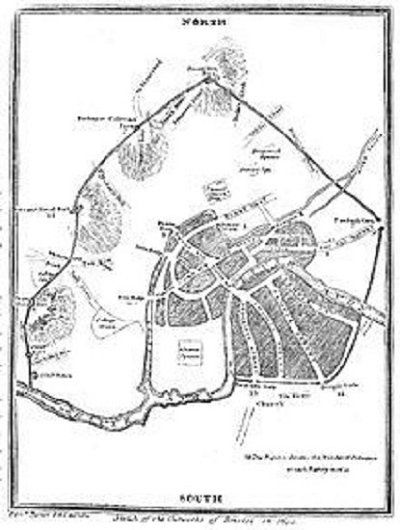 If you had any romantic notions about the Civil War: dashing, arrogant cavaliers and sturdy, righteous roundheads, Professor Ron Hutton quickly dispels them with fascinating story of ruthless tactical skill, hunger, dung and disease in his talk "The Civil War in Bristol and its Neighbourhood" which he presented to the Thornbury History and Archaeological Society on Tuesday 14 October 2014.

When the Civil War broke out in 1642, Bristol's first reaction was to remain as neutral. Only 30 of the 270 merchants in the city declared for either side, and those that did were politely encouraged to join the fighting in another county. However, the peace ended in December 1642 with the Colonel Charles Essex and 2000 parliamentarians surrounding Bristol. Whilst the Merchant Venturers were debating what to do, the Mayor's wife and 200 ladies took matters into their own hands and let the army in, avoiding any bloodshed in the process.

The decisions to let the soldiers in was not without cost though, as the soldiers expected board and lodging, and even when they were fed they were badly behaved: on one occasion they stole the chamber pots from the Town Council while a meeting in progress, and barred the doors, not letting anyone out until money had changed hands. This disharmonious relationship was brought to a swift end in July 1643 when the Charles I's nephew Prince Rupert of the Rhine descended on Bristol with 14,000 men. Prince Rupert knew that to keep hold of the city he would need to pay and feed his soldiers, and build defences. Part of his plans to achieve this was to confiscate all the cows from Thornbury, and force the young men of Thornbury at gun point to march to Bristol and build Royal Fort (at the present day site of Bristol University) and Brandon Hill fort.

The administration of a city is a difficult enough job at the best of times without trying to win a war, and it got the better of Rupert; one person to benefit, though, was the Raker of Dung whose annual salary was increased to the princely sum of £10 a year. Conditions worsened with an outbreak of plague: 3,000 of a population of 25,000 died of plague in the summer of 1645, and fifth of the population of Bristol and Thornbury fled. By the time Cromwell's New Model Army attacked in 1645 Rupert's army was just too depleted to repel them, and he offered to surrender. The Parliamentarians gave him an escort of 1,000 men to journey to Oxford, and it was it was good job they did as the inhabitants of Thornbury had not forgotten what had happened to their young men and cattle and tried to murder him in transit. It was twenty years before Bristol and Thornbury recovered from the effects of the Civil War, and it would have been longer if had not been for trade routes opening up with the New World.